This fall the NFL has made news with dramatic endings and must-see TV for four quarters. The Vikings are more than doing their part with 12 of their 13 games decided by one possession (eight points or fewer).

And in seven of the games the outcome could have, or was, decided on the final play.

With four games remaining on the schedule, the 6-7 Vikings might tie or break the NFL record for most one-possession games in a season.  The 1994 Giants and 2015 Ravens hold the record with 14 each. 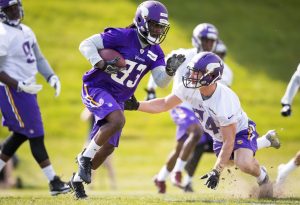 NFL rosters are loaded with gifted playmakers including Viking wide receivers Justin Jefferson and Adam Thielen, and running back Dalvin Cook.  The league likely has never offered more extraordinary athletes including at the skill positions of quarterback, pass receiver and running back.  NFL rules favor the offense (holding could probably be called on most plays) and teams stretch defenses until they break with sophisticated schemes and quick strike pass plays.

The NFL show seems like basketball on grass, remindful of the NBA and its blueprint for games decided in the closing minutes.  That’s long been part of pro basketball’s formula for entertainment success, and now similar drama is present on the football field.

This season the NFL has 28 games decided by a game-winning score on the final play. That’s the most ever through Week 14.

There have been 39 games with a game-winning score in the final minute of regulation or in overtime. That’s the fourth-most at this point of a season all-time (tied with 2003).

A Vikings executive, speaking anonymously after being asked for a scoop:  “I don’t have anything.”

Earlier this fall sources believed the Vikings had interest in Lincoln Riley as their future head coach.  At that time Riley may have been curious about his next move from head coach of Oklahoma.  Since then he has taken over at USC.

The Big Ten Network’s football Signing Day coverage will be live from 1 to 4 p.m. Central Time Wednesday, with the show repeating that night.

The Goal Line Club will hear from Gophers coach P.J. Fleck about his 2022 recruiting class at a Huntington Bank Stadium luncheon Wednesday.  In the evening the club hosts a Happy Hour at the stadium featuring Minnesota recruiting authorities Ryan Burns and Luke Buer. https://www.goallineclub.org/

Minnesota Mr. Football winner Emmett Johnson from the Academy of Holy Angels had no power five offers until a few days ago but now is expected to sign a national letter of intent with Nebraska.  In June the Gophers promised Zach Evans from Rockwall, Texas that he would be the only running back offered a scholarship for the class of 2022, per Burns.

Running back Max Grand, from Ellsworth, Wisconsin, will be a preferred walk-on in the class of 2022.

Arriving Friday at Target Field: A 53-foot trailer housing ice-making and ice-monitoring equipment to create an NHL-caliber skating surface for the January 1 Winter Classic between the Wild and Blues. It’s billed as the world’s largest mobile refrigeration unit.

Condolences to the family of Jack Lanza who died earlier this month at age 86. The Minneapolis-born and longtime Minnesota resident is a WWE Hall of Famer.  The DeLaSalle High School alum briefly played football for the Gophers, and first wrestled using the name “Cowboy Jack Lanza.”  Then he switched to the villainous role of “Blackjack Lanza” and later was a producer for the WWE.  Despite his stage presence as the “world’s meanest wrestler,” Jack was a private and kind man.

Here is a trivia question that will stump just about everyone (no Google): Who was the first Northwoods League alum to make the majors? Answer at the bottom of the column.

New York Times best selling author and former University of Minnesota golfer Harvey Mackay is a COVID-19 “long hauler” but his health is improving. He will be in attendance at Minnesota’s December 28 Guaranteed Rate Bowl game against West Virginia in Phoenix (his second home, along with Minneapolis).

Britt Robson, the elite Timberwolves writer, resonated with many fans when he Tweeted this Monday about controversial D’Angelo Russell: “As an ex-DLo ‘hater,’ I get it’s hard to give him credit for elevating his team at both ends this year. But the game is dynamic—your mind is supposed to be changed if you watch honestly.  If DLo reverts to his matador D+coach-killing indifference, I’ll start ripping him again.”

Former Wolves head coach and U alum Ryan Saunders attended the Gophers’ stunning basketball upset over Michigan Saturday night in Ann Arbor.  Saunders’ next job could be either in the NBA or college.

The 8-1 Gophers (1-1 in the Big Ten) have three nonconference games before resuming league play at home against Illinois Sunday, January 2.  If Minnesota wins the next two, the Illini game might be the first sellout of the season at Williams Arena.

Gabe Kalscheur, the former Gopher who transferred earlier this year to Iowa State, is the second leading scorer for the AP No. 11 ranked Cyclones, averaging 11.6 points while making .319 percent of his field goals (.245 of three pointers).  The 10-0 Cyclones were 2-22 last season.

The NWCA Division I Wrestling Coaches Poll out today has undefeated Big Ten programs Iowa, Penn State and Michigan at the top, with the 1-1 Gophers ranked No. 14.

Trivia answer: Jeff Weaver, a former Dubuque Mud Puppy pitcher, became the first Northwoods League alum to make the majors when he started for the Tigers against the Twins on April 14, 1999.