Whether Dalvin Cook reports to the Vikings opening of training camp tomorrow is one of the NFL’s trendy stories this week.  The gifted running back, after three seasons with Minnesota, wants a new contract presumably paying him $13 million or more annually.

That the Vikings leadership, including general manager Rick Spielman, hasn’t made a deal with Cook and his agent in the offseason indicates how far apart the parties involved appear to be. The Vikings recognize Cook, whose 1,135 yards rushing was 10th best in the league during the regular season last year, is an impact talent, and at 24 years old isn’t even near his peak as a rusher, but there are factors giving them pause including salary cap issues.

Although Cook is the team’s most dynamic player on an offense built for running, he isn’t going to command the NFL’s top salaries for running backs that are reportedly $15 to $16 million. Not only do the Vikings have cap issues, but Cook’s NFL career has been marked by both spectacular performance and injuries that have sidelined him.

Then, too, the Vikings have an NFL caliber starting running back in Alexander Mattison.  As a rookie last season playing behind Cook, he rushed for 462 yards and his 4.6 yards per carry was similar to Cook’s 4.5.  Mattison may not be as explosive as Cook, but he is a quality runner and was a third round steal from the 2019 NFL Draft.

Offensive coordinator Gary Kubiak’s zone blocking scheme is favorable to runners.  He proved that not only in his first season with the Vikings, but in prior years with the Broncos in Denver.  Cook is fortunate to play in a scheme that can showcase his talents of running inside and outside, plus catching passes (53 receptions last year, 9.8 average).

NFL players are fined for not being in training camp.  That’s hardly an incentive for Cook to miss much, or any time, with the Vikings in coming days or weeks.  It just might be that all involved could agree on a multi-year deal that pays Cook in the range of $10 to $11 million annually.

Although it’s been speculated the Vikings might trade Cook for a high future draft choice, that seems improbable and foolish.  The Vikings need Cook in 2020 and the seasons beyond with their focus on the running game.  A Cook-Mattison tandem takes a lot of pressure off skittish quarterback Kirk Cousins and a receiver group trying to recover after the offseason trade of star Stefon Diggs.

Friends and former teammates of Noel Jenke were saddened last weekend to hear of his death.  Noel, 73, died of unknown causes several days ago in Wisconsin, and the Owatonna, Minnesota native is remembered as one of the Gophers’ greatest athletes ever.

Noel earned seven letters at Minnesota, with three each in football and hockey, and one in baseball.  He was an outstanding linebacker on the Gophers’ 1967 Big Ten championship football team.  Teammate Jim Brunzell said this via email: “God, what a great athlete and human being.  He was one tough linebacker!”

Another football teammate, Jim Carter, played with Noel at Minnesota and in Green Bay with the NFL Packers.  “He had lots of heart and he was fun to be around,” Carter texted.

Noel played five seasons in the NFL with three teams, the Vikings, Falcons and Packers.  Baseball might have been his best sport but football coach Murray Warmath wouldn’t let him play because of the conflict with spring football.  As a senior, and after his football eligibility expired, Noel played college baseball for one season and hit .402.  It was 50 years ago last summer he made his minor league debut as an outfielder in AAA for the Red Sox’s Louisville farm team, but he never made it to the majors.

A celebration of Noel’s life will be held for family only tomorrow (Tuesday) at a church in Brookfield, Wisconsin. 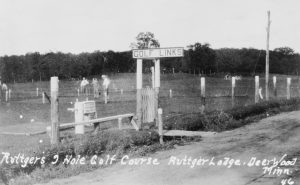 Ruttger’s, located near Deerwood, Minnesota, opened its 9-hole golf course 99 years ago this year, becoming the first resort golf course in Minnesota. The course was rough by today’s standards with sand tee boxes, dirt greens and fairways “mowed” by the resort’s livestock. The course was the brainchild of long-time resort guest Hans “Zig” Ziegler, who convinced owner Alec Ruttger to convert some of the resort’s pasture land into a golf course, and it opened to the public in 1921.

The course has had many names through the years, starting with Ruttger’s Golf Links, but is now known as Alec’s 9 in honor of Alec Ruttger. Much of the 2,135-yard par 33 layout of the course has been maintained, but brought up to modern standards. In other words, the tee boxes are neatly mowed grass, and you won’t see any cows on the fairways.

Among pregame activities for the Minnesota Twins home opener tomorrow night will be the playing of both the “Star-Spangled Banner” and “Lift Every Voice and Sing,” the Black national anthem.

Anonymous Sports Headliners reader with a tongue-in-cheek reference to the Minnesota Timberwolves: “I’ll admit it took me awhile to figure it out, but I’ve recently come to the realization that the T-Wolves defense this season was ahead of the curve in practicing social distancing on the court.”