Phil Mickelson is the biggest name in sports this week after becoming the oldest player ever to win a major golf championship on Sunday.  Hollis Cavner, who runs the 3M Open, is optimistic the 50-year-old Mickelson will be part of the field at TPC Twin Cities July 22-25.

Cavner and his company run various golf tournaments in the United States.  He and his team are on the road much of the year recruiting players including the now hottest golf name in the world. So far Mickelson is noncommittal about the 3M, a regular stop on the PGA Tour. “He’s pretty direct,” Cavner said.

Cavner and Mickelson have a long friendship.  In 2010 the two played together in the AT&T Pebble Beach Pro-Am, with Cavner participating as an amateur. “He’s a helluva good guy,” Cavner said. 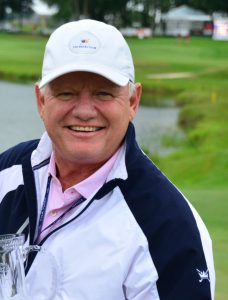 That relationship will be helpful in continuing to pitch Mickelson but winning the PGA Championship Sunday is a game changer for “Lefty’s” schedule.  Cavner said Mickelson might receive an invitation to play for the U.S. in the Tokyo Olympics scheduled in late July and early August.  Even if that doesn’t happen, the British Open is just a week before the 3M.  He won the Open in 2013 and his appearance in Scotland would be important to his international fame and brand.

Mickelson’s life is a whirlwind now and over the next few weeks with various requests including TV and personal appearances.  Cavner said Mickelson will be “inundated” with opportunities after shocking the golf world by winning the PGA.  He entered the tournament ranked 115 in the world and Fox Bet had him at 400-to-1 odds to win in Kiawah, South Carolina at the Ocean Course.

Cavner runs the Wells Fargo Championship in Charlotte.  He saw Mickelson in comeback mode at his tournament.  With a slimmer and stronger body, more relaxed mental approach and willingness to play safer shots, Mickelson was re-engaged.

He was on a mission to improve his performance the week of the Wells Fargo, with Cavner observing Mickelson “working his butt off” in practice hitting buckets and buckets of balls at the range.  “…He was really working on his game that week and I guarantee he beat more balls that week than anybody out there,” Cavner said.

Mickelson shot a round of 64 at the Wells Fargo and although he didn’t win the tournament, the resurgence in his game was evident to insiders.  “He was gearing for this (excelling at the PGA),” Cavner said.

Sunday was remarkable, with Mickelson shocking the sports world at almost 51 years of age and winning his first golf major event since 2013.  “He is so driven to be good,” Cavner said.  “He doesn’t want to be second ever.  He’s always been that way.  When you’re that good, some people are going to love you, some people are not.”

Critics have said Mickelson is cocky but Cavner doesn’t see it that way and views his friend as a great athlete who believes in himself and has done a lot to help others including through charity. “It wasn’t cocky.  He was good at what he did, and he knew it and he tried to prove it every week,” Cavner said.

Cavner can see Mickelson contending for more major titles this year and in 2022. “If he continues to play like he is, it wouldn’t surprise me at all,” Cavner said.

In his 40s Mickelson didn’t want other players to hit longer off the tee than he did.  The result was trouble on the fairways, sometimes hitting 50 yards off target.  “It hurt his game,” Cavner said.  “Now he’s dialed it back. (But) he’s still hitting it tremendously long.”

Mickelson has now won six majors, something that will secure his place on the Mount Rushmore of golf legends.  “He’s definitely in the top 12 of all time,” Cavner said.

Ticket sales via the 3M Open website were to Cavner’s liking even before Mickelson’s historic Sunday.  Despite possible COVID restrictions, crowds of 20,000 per day are predicted.  With or without Mickelson, the tournament field will have appeal.

“There’s a lot of guys who played in the PGA Championship that are coming,” Cavner said.  “Some of them that were on the leader board (at the PGA) in the last couple days.”

A hockey authority, speaking anonymously, sees the Minnesota Wild as “50-50” in earning a win tonight against the Vegas Golden Knights.  A win ties Minnesota and Vegas at three games each in the best of seven playoff series.  The source believes the Wild need to take an early lead to win the game at Xcel Energy Center.  “I don’t see them coming from behind to win.  They need momentum out of the gate.”

The Wild received an unexpected lift from veteran Zach Parise in Monday night’s win.  He scored a goal after mostly being a non-contributor of late.  “They need a spark (tonight) like Parise,” the source said.

Don’t be surprised if Parise is playing elsewhere next season.

With COVID-19 restrictions, the Wild has been limited to 4,500 fans for first round playoff games.  That might translate to about $450,000 in gross ticket receipts, much different than capacity crowds generating revenue of $1.2 to $1.5 million. If Minnesota could advance to the second round of the playoffs and stage sellouts, it would help the franchise’s finances that have taken a major hit because of the pandemic.

Deep condolences to Mike Wilkinson following the death Sunday of wife Susan Wilkinson, 76, who struggled for years with muscular dystrophy and asthma. Mike is a passionate Golden Gophers football follower and author of the Murray Warmath biography, The Autumn Warrior.

The Minnesota Twins, a preseason favorite to be 2021 AL champions, are No. 26 in MLB.com’s latest power rankings of 30 teams.

Outfielder Matt Wallner, the Forest Lake, Minnesota native, is the Twins Minor League Player of the Week. The 23-year-old played in six games last week for Single-A Cedar Rapids, hitting .400 (10-for-25) with two home runs and four RBI, including a four-hit game on Thursday against Beloit. He was drafted by the Twins in the first round (39th overall) of the 2019 First-Year Player Draft out of the University of Southern Mississippi.