The Twins made a significant payroll dump Friday, trading away starting pitchers Jose Berrios and JA Happ. Their 2021 salaries are $4,142,980 and $5,204,285, per MLB payroll authority Spotrac.com.

Happ, 38, had a questionable future with the club but the 27-year-old Berrios was a foundational talent if he was willing to stay in Minnesota beyond the 2022 season. Front office executives Derek Falvey and Thad Levine decided the uncertainty of signing Berrios to a long-term deal starting with the 2023 season wasn’t worth losing the opportunity to acquire two of the Toronto Blue Jays’ best prospects. 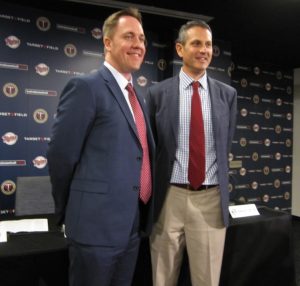 After the 2022 season Berrios, who was Minnesota’s best starter, is on track to command a contract over $100 million. Before the trade, Falvey and Levine faced the prospect of Berrios and center fielder Byron Buxton both having new deals in 2023 for more than $100 million each, plus incentives to earn more.

Buxton, also 27, reportedly is more amenable to staying with the Twins after team control ends following the 2022 season. Although the oft-injured Buxton goes through stretches where he is sidelined more than being in the lineup, he has flashed superstar potential with his hitting, fielding and running the bases. The Twins are in a historically difficult place with the Buxton negotiations, trapped between his career history of physical woes but tantalized by performances that draw comparisons to baseball’s best player, Mike Trout of the Los Angeles Angels.

Two years ago New York Yankees center fielder Aaron Hicks, a former Twin, signed a reported seven-year $70 million deal. Hicks is a poor man’s Buxton. The Twins will try to lock up Buxton with a deal that includes incentives for playing in a certain number of games, or plate appearances. That could be a hang-up with Buxton and his advisors who are positioned to ask for sizeable guaranteed money—perhaps five-years, $110 million.

Negotiations will happen during the offseason with Buxton. He earns $5,125,000 this season, per Spotrac.com. That payroll authority also lists the $7,897,884 salary of DH Nelson Cruz, who was recently traded to the Tampa Bay Rays. If the Twins brought back Berrios, Cruz and Happ in 2022, on similar deals as this season, that totals about $17 million.

In the next offseason the team is likely to part with 31-year-old shortstop Andrelton Simmons who has a one-year deal at $10,500,000. Starting pitcher Michael Pineda, 32, makes $10 million this season but with unrestricted free agent status in the offseason he might be another payroll savings. Reliever Alex Colome, a first-year bust with Minnesota, is making $5 million in 2021 and unlikely to return. Other Twins like Max Kepler (due $6,750,000 in 2022, per Spotrac) could be expendable. The grand prize of payroll reduction is if the Twins find another franchise willing to take on third baseman Josh Donaldson’s deal paying him $21 million next year.

The point is the Twins, historically careful with high salaries, are potentially looking at a much reduced payroll the next couple years and they now may feel more comfortable about offering Buxton a new contract he will sign. Whether Buxton is worth a mega-deal to a franchise that fans are worried is headed for reset mode in 2022 and beyond is another question. Certainly securing Buxton for years to come will help the organization’s image and ticket sales. But Buxton and a ho-hum supporting cast won’t produce championships. Trout’s Angels have been mediocre for a long time and can only dream of playing in the World Series.

It takes a roster of high performers to win championships and no team goes deep into October without pitching. Falvey and Levine substantiated that need in their flurry of trades late last week when six of the seven new players acquired were pitchers.

Austin Martin, 22, the infielder-outfielder acquired from Toronto in the Berrios deal, could be Buxton’s successor in center field if the veteran leaves Minnesota either by trade or free agency. Martin has been ranked the Jays’ second best prospect and 16th overall in baseball, per Mlb.com.

Joe Ryan, acquired this summer from the Rays for Cruz, is 1-0 with a 1.50 ERA as a starting pitcher for Team USA in the Olympics. The Americans have now advanced into the medal round.

Best player from the Twins organization ever to play for the U.S. in the Olympics? Jacque Jones, 1996.

Condolences to family and friends of Tom Duffy of Minneapolis, who passed away in late July. Retired from IBM, Tom was the second person Hollis Cavner hired to help run the 3M Championship Tournament in 1992. Tom told Cavner he would work for one year in sales and marketing, but stayed for 19.

Cavner said he learned a lot from Tom including how to deal with people. “He is one of the finest gentlemen I ever met in my life,” Cavner said.

Expectations are Cavner’s 2021 3M Open Tournament will gift a minimum of $1.5 million to charity. The figure is in line with previous years.

Next year’s 3M Open will be July 18-24 and again following the British Open. Cavner likes that positioning and hopes for it indefinitely because he sees top players wanting to play here, and then taking a break for the FedEx Cup Playoffs.

Big Ten men’s basketball coaches like to brag on their league but the players aren’t doing much to captivate NBA scouts. In the last two NBA drafts only two conference players have been selected in the first round, Maryland’s Jalen Smith in 2020 and Michigan’s Franz Wagner in 2021.

No Big Ten team has won an NCAA title since Michigan State in 2000.

Congratulations to Edina resident and prominent Minnesota businessman Ron Leafblad on his upcoming induction September 10 into the University of Wisconsin Athletic Hall of Fame. Leafblad was a tight end on the 1963 UW Rose Bowl team and captained the 1964 squad. The Chicago-area native has been an exemplary supporter of UW through the years including with the school’s alumni association and letter winners club. He was a student representative of the Athletic Board while in school. He and his wife Diane have generously donated funds to assist academics, football and alumni efforts at UW.

Leafblad is the owner of a diverse group of companies whose products range from retail apparel to corporate uniforms, and from website development and fulfillment to precision parts for the computer and medical equipment industries. His Gold Country business has for several years been part of the Sports Headliners group of advertisers.

Scheels in Eden Prairie has been promoting an appearance today by University of Minnesota football coach P.J. Fleck. A $50 ticket at the meet and greet includes an autographed copy of his new book, Row the Boat, with proceeds benefiting the U Masonic Children’s Hospital and Ronald McDonald House.

It looks like WCCO Radio’s Sports Huddle, the much listened to Sunday show that started in 1981 and aired through early 2020, won’t be returning to the air.