Starting tonight the Twins have a three-game home series against the Yankees, probably the best team in baseball. The series will be the biggest challenge yet for the surprising Twins who lead the AL Central Division with a 32-24 record and are 4.5 games up on the second place Guardians.

Winning two of three against the mighty Yankees would be the best credibility development yet for the Twins who finished last in the division in 2021. Is Minnesota a playoff contender that can hang with the Yankees? Or is this year’s Twins club a pretender that has improved but also benefitted from a comfy schedule?

It’s r-e-s-p-e-c-t when talking about the Yankees who have won six straight and have MLB’s best record at 39-15. As every follower of Abner Doubleday’s game knows, pitching dictates success and New York’s is lights out this season.

New York’s starting pitching staff has a gaudy 2.55 ERA. While the Twins have yet to announce their starter for tonight, the Yankees will use Jameson Tallion. In his last start he pitched seven perfect innings against the Angels before allowing a lead-off double in the eighth. Tallion is 6-1 with a 2.30 ERA.

The Yankees lead the majors in home runs, partially because of 21 from Aaron Judge who is on pace to hit more than 60. In the team’s recent 6-0 homestand New York out-scored opponents 38-7!

The Yankees won in extra innings Sunday against the Tigers on former Twin Josh Donaldson’s sac fly. He is hitting a lowly .229 with five home runs. Ex-Twin Aaron Hicks is struggling, too, with a .213 average.

If the Twins were a stock, today could be a savvy time to sell. While dealing with COVID, plus injuries to key personnel and inconsistent performance, Minnesota is 3-5 in its eight games. Not only are the Yankees immediately ahead on the schedule, but also the Rays, 31-23, come to town this weekend.

If the Twins miss the playoffs—or exit in a hurry from the postseason—the results won’t set well with fans. A Sports Headliners reader recently emailed a critical assessment: “In many ways they are the classic Minnesota pro sports team—rarely bad, never great, always kinda hovering in the middle with an occasional year of breaking through a bit and (offering) hope. Then occasionally playing in the playoffs and being kicked to the curb by other teams who really have serious (pitching) talent.”

The reader pointed out the Twins were last in the World Series in 1991, while all the other Central Division clubs have been to the Fall Classic more recently. He also wrote that while the Twins are working on a 0-18 playoff record since 2002, his research shows the Tigers have won 25 post season games, the Royals 22, the Guardians 16 and White Sox 14.

Timberwolves CEO Ethan Casson recently talked about the growing ticket buying interest in the team. “We sold more single game tickets this year than we ever have in the history of the franchise,” he told Sports Headliners.

Interest is carrying over to new sales for the 2022-2023 season. “…We’re top five in the NBA today in total new season tickets sold for next year,” he said last week.

Casson declined to provide specific totals about new and past season tickets. He acknowledged sales have been “significantly down” in recent seasons because of the pandemic and disappointing team performance.

Who replaces Dave Benz as TV play-by-play voice of the Wolves? Casson said the selection will be “driven” by Bally Sports.

Wouldn’t it be interesting if the choice is a female broadcaster? Is longtime Wolves courtside reporter Marney Gellner interested? 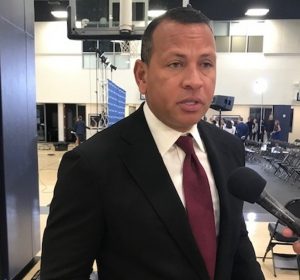 New Timberwolves owner Alex Rodriguez considers this a basketball town and said fans are “starving for winning and stability.” He told Sports Headliners the organization is dedicated to making this a model franchise in every way. A place where the vision, capital and resources convince players they want to be here.

“I understand what it takes to be a champion,” he said. “I understand…(what) champions look like. I also understand that it is very, very difficult to win. …”

Mike Nowakowski from Ticket King said recently the hottest ticket for an upcoming event in town is the June 11 Eric Church concert at U.S. Bank Stadium. Floor seats were selling for $250 each late last week.

The basketball Gophers have players settling into dorms this week. Next week team practice with the coaches begins.

Minnesota hockey authority Lou Nanne told Sports Headliners the “only chance” the Wild has to retain restricted free agent forward Kevin Fiala is to move on from defenseman Matt Dumba and his reported salary of about $5.2 million. The guess here is that without Dumba and some tweaks to the payroll, the team salary cap can work allowing a new deal for Fiala.

It’s a direction Nanne would go if the former North Stars president was running the Wild. A gifted playmaker, Fiala was second on the team in points during the regular season. “I think Dumba is easier to replace than Fiala,” Nanne said.

Tony Sanneh, the former international soccer star and founder of The Sanneh Foundation, is the latest guest on the “Behind the Game” TV show. He talked about his path from youth soccer in his native St. Paul to being a key contributor for the United States in the World Cup, and also his foundation’s work to improve lives and opportunities for Twin Cities youth. https://www.youtube.com/watch?v=tVztKwZ5gYc