An authoritative NBA draft website has moved Daniel Oturu, Minnesota’s sophomore center, up to No. 10 in its first round 2020 mock draft. That leads to speculation this will be his last season playing for the Gophers.

Nbadraft.net listed Oturu in the 20s awhile ago but the play of the former Cretin-Derham Hall star continues to raise his draft stock. Much improved over this freshman season, Oturu seems to even be trending upward in recent games (in the last three he is averaging 23 points and 18 rebounds).

Former Gophers coach Jim Dutcher sent great centers into the NBA while at Minnesota and he was asked Monday about Oturu’s No. 10 ranking. “I am not surprised,” Dutcher told Sports Headliners. “They (NBA scouts) look for guys like him because they want their big guys not only to be able to board and block shots, but to step out to the three-point line, and he can do that.”

The 6-foot-10, 210-pound Oturu is averaging 19.1 points per game and 12.4 rebounds in 14 games this season. He’s made .633 percent of his field goals. He is seven of 22 on three point attempts, playing on a team that relies on others to do most of the long range shooting. For a young player of his size, Oturu has a smooth shooting form and shows the potential for major improvement with the three-point shot that he will need at the next level.

In today’s NBA, centers have become both inside and outside scorers. They also need the athleticism to run the floor, transitioning from offense to defense and sometimes guarding smaller players. Oturu is averaging three blocked shots per game, another indication of his versatility and contribution to the Gophers.

Dutcher refers to Oturu as the best center in the Big Ten, and he does check a lot of boxes on an NBA scout’s list. “He’s good. I am impressed with him,” said Dutcher, who coached Minnesota to the 1982 Big Ten title.

Dutcher admires the skills of Oturu and Minnesota point guard Marcus Carr who is averaging 15.9 points per game. “Remove those two, and then there’s not an awful lot of talent there. So they struggle,” Dutcher said.

Minnesota’s Big Ten record is 2-2 and overall the Gophers are 8-6 after playing one of the more difficult nonconference schedules in the nation. The next game is Thursday night at nationally ranked Michigan State. The Spartans are the only undefeated team in the conference at 4-0 (12-3 overall).

The Big Ten is unusually competitive and balanced. “Everybody beats everybody,” Dutcher said.

The Minnesota’s chances of earning its way into the NCAA Tournament? “I Think they’re pretty good because they’re going to take a minimum seven teams (from the Big Ten),” Dutcher answered. “So you don’t have to have a great year. If you can finish .500 in the conference, you’re probably going to the NCAA.”

The Big Ten has 12 teams (no other conference has more than six) in the top 50 of the NCAA NET Rankings with Minnesota at No. 40

The Nbadraft.net first round mock draft yesterday projected former Hopkins star Zeke Nnaji, a freshman at Arizona, being selected at No. 17 in the first round. The 6-11, 240-pound power forward-center impresses in multiple ways including the energy with which he plays. “He’s really good,” Dutcher said. 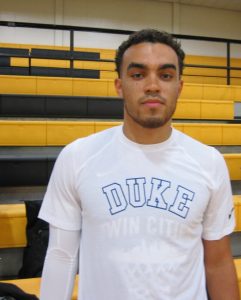 Tre Jones, the Duke sophomore point guard from Apple Valley, made the website’s first round mock draft last season but he now is projected in the second round. Dutcher thinks that is a mistake, and he compared Tre favorably with older brother Tyus who is in the NBA and also played at Duke. “I think he’s a better pro prospect than Tyus was because he’s a better shooter,” Dutcher said.

Brian Dutcher, Jim’s son and a University of Minnesota alum, is head coach at San Diego State where the Aztecs are 15-0 and ranked No. 7 nationally in the latest Associated Press poll. They are one of two undefeated major college teams along with 13-0 Auburn. Brian, 60, is in early conversations for national coach of the year.

Former Gopher Amir Coffey, who has been playing mostly in the G League, made his NBA regular season debut with the Clippers last week. He has played briefly in two games.

Looks like the Vikings made good on their “chip on the shoulder” mantra the organization identified with during the offseason. After an 8-7-1 season in 2018 and not making the playoffs, general manager Rick Spielman used the phrase in the offseason.

Back in June, reserve quarterback Sean Mannion acknowledged the team’s “chip on the shoulder” mindset to Sports Headliners. “I think that would be an accurate way to describe it, for sure,” Mannion said. “The big thing is just channeling that and focusing on your craft. Using that as motivation but not letting it become destructive. Letting it be something that motivates you to work on your skills, work on your abilities, and just continuing to grow as a player.”

The Vikings earned a 10-6 regular season record and made their way into the playoffs where they won their opening game last Sunday against the Saints in New Orleans, although they were about a touchdown underdog. Saturday the Vikings play the NFC No. 1 seed 49ers in Santa Clara and they will need to continue their aggressive attitude.

After Sunday’s 26-20 overtime win in the noisy and partisan Superdome, Vikings head coach Mike Zimmer was asked about his team’s identity. “I think we’re tough,” he told listeners on KFAN Radio. “We’re good competitors. Everybody doubted us coming in here. Not one person gave us a chance to win this football game, and we’ll hear the same thing next week.”

Former Gophers football coach Lou Holtz had his 83rd birthday Monday. The legendary Holtz, whose coaching stops included Notre Dame where he won a national title, believes Alabama was the best college football team in 2019, per multiple online reports. That should be of interest to Minnesota fans because Auburn defeated Alabama and then lost to the Gophers in the Outback Bowl.

WWE personality Brock Lesnar will be an honorary Gophers coach for the wrestling team’s Big Ten opener against Wisconsin at Maturi Pavilion Friday when the program celebrates the 20th anniversary of his NCAA Championship. Youngsters up through eighth-grade will have the opportunity to be in a group photo with the legendary Lesnar.