Intriguing If WR Wright Subs for U

Chris Autman-Bell, counted on this fall to be the Golden Gophers’ No. 1 receiver, is sidelined with an undisclosed injury, but possibly a high ankle sprain. The injury happened in practice last week and speculation has been Autman-Bell could miss the September 2 opening game against Ohio State. Head coach P.J. Fleck said after practice last night Autman-Bell’s injury is “week-to-week” and predicted a “legitimate chance” he could compete against the Buckeyes.

Autman-Bell, a senior, has played in 33 games during his Minnesota career, with 78 receptions for 1,250 yards and six touchdowns. That’s a lot of experience for the talented wide receiver who makes difficult catches and has the skills to be an NFL prospect.

If Autman-Bell can’t play against top five tanked Ohio State, who gets his assignment? It could be a group approach and several receivers had a lot of reps in practice yesterday. None seem more intriguing than Dylan Wright who showed his speed and pass catching skills Monday.

“He consistently makes huge plays,” Fleck said. “He’s just gotta be able to have the detailed part of the game continue to be ironed out.” 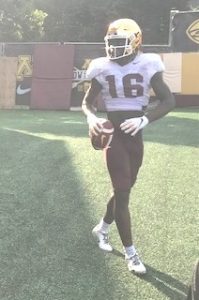 Wright, 6-3 and 215, is a redshirt sophomore and new to the roster after transferring from Texas A&M where he played in a total of eight games in 2019 and 2020.  Fleck didn’t offer more explanation on how Wright needs to continue improvement.

“He’s the most athletic receiver on the roster,” Burns told Sports Headliners in regard to Wright. “His straight line speed, he can take the top off the defense. He knows how to go up and get a football.”

247Sports ranked the Dallas native the No. 12 wide receiver prospect in the country coming out of high school after his 2018 senior season. Wright was also named an Under Armor All-American.

Matthew Trickett, the Kent State transfer, made 11 of 14 field goal attempts late at Monday’s practice, according to Daniel House of Gophers Guru. Trickett could be a lock to win the kicking job. True freshman quarterback Athan Kaliakmanis, from Antioch, Illinois, threw some of the best spirals at practice.

Burns tracks Gophers and Big Ten recruiting. In Minnesota’s 2021 recruiting class five of the 18 players are from Illinois but for 2022 none of the 13 verbal commits are from that state, per 247Sports. New University of Illinois coach Bret Bielema has vowed to make in-state talent a top priority.

Burns said restrictions caused by the pandemic limited Minnesota’s recruiting in Illinois for its 2022 class. The Gophers did hold a camp in the state but chose not to offer anyone a scholarship. “I don’t think Minnesota is scared of Bret Bielema when they recruit the state of Illinois,” Burns said.

The Gophers will again wear a helmet sticker honoring the late Sid Hartman. The legendary media figure died during the 2020 season and in late October the Gophers began wearing a remembrance sticker on the back of their helmets.

There was expectation Minnesota Wild forward Kevin Fiala, who last season led the team in game-winning goals (5), shots on goal (162), power-play points (14) and takeaways (41), might earn $6 million on his next contract but the NHL club announced a one-year $5.1 million deal yesterday. He also ranked second in scoring with 40 points, 20 goals and 20 assists.

No word from St. Thomas on what radio station will carry Tommies football and who the on-air talent will be in its first season of Division I FCS.

The Minnesota Twins’ 2022 season schedule has a quirk with the club starting play with a split doubleheader in Detroit after the MLB All-Star break. Other clubs will play Friday, July 22 but because of a concert at Comerica Park that week the Twins and Tigers will have two games Saturday, July 23.

Every year the Twins ask schedule makers to start them on the road and for 2022 they had extra incentive not to be at home and conflict with the women’s NCAA Final Four basketball games at Target Center, April 1 and 3. The Twins open the 2022 season March 31 in Chicago against the White Sox, then go to Cleveland before playing the home opener April 7 with Seattle.

All MLB teams must at least occasionally begin their seasons at home. “We think that an extra week of Mother Nature warming in April is to our benefit, to our fans benefit and our players benefit,” said Twins president Dave St. Peter.

Tommy Davis, a freshman guard on the Golden Gophers’ 1982 Big Ten championship team who finished his career as Minnesota’s fourth all-time leading scorer, will be inducted into the M Club Hall of Fame September 10. A long range shooter, Davis set a Big Ten record making 15 of 16 field goal attempts in a game at Indiana.

Davis, a Maryland native, was hotly recruited out of high school. Gophers coach Jim Dutcher was looking for an edge and asked Walter Mondale, a Minnesota native and then vice president of the United States, to help. Tommy’s dad received a surprise call one day at work, Dutcher told Sports Headliners. Someone in the office informed Mr. Davis that the vice president was on the line. “The vice president of what?” the unknowing Mr. Davis asked.

Giovanni Jenkins is the new athletic director at Washburn High School in Minneapolis.