Asked to name several Vikings that fans should evaluate this summer, Jeff Diamond began his list with tight end Irv Smith Jr. who missed all of last season because of a knee injury. Diamond, the former Vikings general manager who was the 1998 NFL Executive of the Year, talked with Smith during mini-camp and believes the 2019 second round draft choice is healthy. 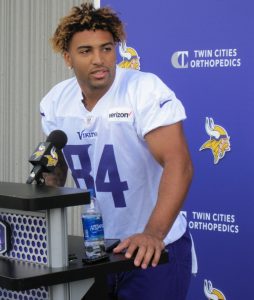 Diamond sees a “load of talent” in Smith. He predicts a potential “huge year” as a pass catcher not only because of Smith’s skills but the wide receiver duo of Justin Jefferson and Adam Thielen commands so much attention.

Center Garrett Bradbury is working to increase his weight and trying to fulfill the potential expected when the Vikings selected him in the first round of the 2019 draft. “He’s just got to be more consistent and a better player,” Diamond told Sports Headliners yesterday. “He’s got the talent to do it if he does put on the weight. He’s really a key guy in that offensive line.”

Diamond said there is intrigue at right guard to see who will start.  The candidate pool could include newcomers Jesse Davis, Ed Ingram and Chris Reed.

Not only is there an injury watch with Smith on offense but on defense, too with pass rushing demons Danielle Hunter and Za’Darius Smith, both outside linebackers. “If those guys are healthy, then the pass rush is going to be there,” Diamond said. “If they’re not, it’s really going to be hard for the secondary to be able to hold up.”

Players in the secondary fill out Diamond’s list of intriguing personnel for fans to watch as training camp opens next week and preseason games are played in August. Andrew Booth Jr., the cornerback from Clemson, had his college progress slowed by a series of injuries. The Vikings selected him in the second round of last spring’s draft but Diamond wonders if Booth has first round talent and might start at corner as a rookie replacing Cameron Dantzler.

Diamond also said to watch who emerges as the team’s second safety along with Harrison Smith. Camryn Bynum has a year of NFL experience but there are high expectations for 2022 first round pick Lewis Cine.

Depending on how the tight ends, including Smith, look the first week or so in training camp the Vikings might have had interest in signing Kyle Rudolph. The former Vikings starter played for the Giants last year but has signed as a free agent with the Bucs as of yesterday.

Rudolph, 32, replaces retired legend Rob Gronkowski and will be catching passes from GOAT Tom Brady. Diamond could see Rudolph in Tampa Bay with the Bucs before it happened. “I wouldn’t be surprised. I think he could potentially be a good fit there.”

Former Vikings wide receiver standout Stefon Diggs now with the Bills and his brother Trevon Diggs, a star cornerback with the Cowobys, are on the latest cover of Sports Illustrated. Stefon’s career was controversial with the Vikings where he wanted a bigger role in the offense.

In the article Stefon said he has no problem with his former team. “I just needed a change in scenery,” he said.

The Vikings sent a news release today announcing 99 percent of season tickets have been renewed. Single game tickets go on sale July 28 and can be purchased on the team’s website. https://www.vikings.com/tickets/single-game-tickets

Twins center fielder Byron Buxton, whose home run gave the American League a ninth consecutive win over the National League Tuesday night, is hitting .216 this season. That has to be among the lowest batting averages ever for a starting player in the All-Star Game.

Yahoo.com reports TV viewership at 7.51 million was the lowest ever for baseball’s showcase but still higher than the 2022 NFL Pro Bowl and NBA All-Star Game.

Chet Holmgren, the former Minnehaha Academy prep All-American, has signed a reported four-year deal with the NBA Thunder that could be worth over $44 million. If Holmgren, the 2022 No. 2 overall NBA draft pick, has an all-star career he could eventually approach $1 billion in salary earnings based on how compensation is accelerating for top players.

The Wolves’ Karl-Anthony Towns, who this summer signed a reported $224 million super max contract extension, isn’t the best player on the team, according to The Athletic. The authority’s rankings of top 125 NBA players has newly acquired center Rudy Gobert at No. 16. Towns, Minnesota’s veteran power-forward and center, is ranked at No. 35.

Gobert, acquired in a block buster trade this summer with the Jazz, has a reported $205 million deal he signed with his former team. Gobert is a three-time NBA Defensive Player of the Year and averaged a career-best 15.6 points last season.

Local fans have been waiting since 2019 for news Tiger Woods or Phil Mickelson would one day headline the 3M Open at TPC Twin Cities. They won’t be here for the 2022 tournament this week and likely not in the future either. Both legends are aging, with Woods having a difficult recovery from his severe auto accident and Mickelson now aligned with golf upstart LIV.

The 3M and other PGA Tour stops are impacted now because of LIV signing up players. The 3M doesn’t have a top 10 ranked player in the tournament. Ticket buyers may be as intrigued to see players with regional ties like Troy Merritt and Mardy Fish than they are to watch No. 14 Hideki Matsuyama and No. 17. Tony Finau.

Inkster, 62, is a past winner of the Patty Berg Award, named after the Minneapolis golf legend and given to players who exemplify the best in sportsmanship, goodwill and contributions to golf among women players. Inkster is a three time world champion and hall of famer who participated in nine Solheim Cups. She was honored by ESPN with the ESPY Award for Outstanding Women’s Golf Performer of the Year in 2002.

The Medtronic Twin Cities Marathon celebrates its 40th anniversary Sunday, October 2. Youth 18 and under can register at no cost. Organizers bill the marathon as the “largest sporting event in the Upper Midwest” with 300,000-plus spectators and several thousand runners.