No everyday position in the Minnesota Twins starting lineup will receive more scrutiny during spring training than left field. Eddie Rosario was plugged in there for several Opening Day starts but the Twins cut him from the roster last winter, leaving a void in left field that 23-year-old Alex Kirilloff might fill during most of the 2021 season.

Kirilloff is one of baseball’s top prospects but it could be the Twins will start the regular season in early April using utility man Luis Arraez in left field. Kirilloff, even if he dazzles in spring training, might be assigned to the Triple A St. Paul Saints roster but later called up to the Twins.

Why wouldn’t Kirilloff begin 2021 in the majors? A factor could be MLB’s service time policy that determines when players eventually become eligible for free agency. If a player accumulates 172 days on a big league roster (either in one year or multiple seasons), he earns a year of service time. After six seasons a player is eligible for free agency. By delaying “the clock” on a prospect like Kirilloff, perhaps adding him to the roster in May, the Twins gain a future financial advantage.

In three previous minor league seasons the left-handed hitter had 1,103 at bats with a .317 batting average, 36 home runs and 177 RBI. Minnesota’s first round draft choice in 2016, Kirilloff makes solid contact with the baseball, hitting to all fields with line drives and also demonstrating power.

Kirilloff has the athleticism, including a strong arm, to play left or right field for the Twins. He also has experience at first base, making him a versatile player already. If anything, the excitement about Kirilloff becoming a big contributor to the Twins has been slowed by past injuries but he has the profile of a top 30 MLB prospect.

Kirilloff is already the answer to an intriguing trivia question. Who is the only MLB player to get a base hit while making his big league debut in a playoff game? Kirilloff, starting in right field, singled in four at bats for the Twins in their final playoff game last September.

The Twins announced this morning all 14 of their home spring training games at Hammond Stadium sold out within 30 minutes.

Former Twin and free agent starting pitcher Jake Odorizzi remains unsigned. He turns 31 next month and could help a club as a No. 3 or 4 starter, but with the Twins’ starting rotation apparently set it doesn’t look like his future will be in Minnesota.

Happy early birthday wishes to Twins TV announcer Dick Bremer who will be 65 next Monday.

It looks like status quo for head coach P.J. Fleck’s Gophers football staff who had expiring contracts January 31. New one year deals are in place including for Rob Wenger who leads special teams that struggled in 2020.

Because of the pandemic, the Minnesota Football Coaches Association’s outstanding annual clinic will be held via Zoom April 8-10.

The MFCA announced its 2020 Mr. Football Award winner Sunday—Wisconsin Badgers-bound Jake Ratzlaff, a strong safety/tight end from Rosemount High School. “As a high school football player, I have never seen one player impact a game in so many different ways,” Rosemount coach Jeff Erdmann said in a news release. “He could start for us at any position offensively or defensively. He could have been our starting QB, offensive tackle or even nose guard because of his athleticism, aggressiveness, and style of play.”

Fired Timberwolves coach Ryan Saunders, 34, could resume his career with a college job. If so, he might be interested in using the famous and entertaining pre-game warm-up routine that rocked Williams Arena when Ryan’s dad Flip played for Gopher coach Bill Musselman. Although Flip was a Gopher before Ryan was born, the warm-up show that filled the arena with delirious fans is something the younger Saunders knows about. 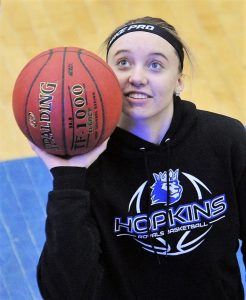 Next year the women’s Final Four returns to Minneapolis for the first time since 1995 and the field will likely include Minnesota prep legend Paige Bueckers leading the Connecticut Huskies. Coach Geno Auriemma won the first of his 11 national titles here that year.