U Lining Up ‘Next’ Shannon Brooks

Enjoy a Thursday notes column with a focus on Golden Gophers football including recruiting for the 2020 class, and comments and quotes from Tuesday’s spring practice open to the media and public.

Per 247Sports, Minnesota has five verbal commitments for its class of 2020. The commits include Topeka, Kansas running back Ky Thomas, who could come to Minneapolis next year as a four-star prospect. Ryan Burns, the local recruiting authority with Gopherillustrated.com, is intrigued by Thomas, listed at 5-11, 185 pounds by 247.

“I think if he can stay healthy, I think he’s going to be the next Shannon Brooks,” Burns told Sports Headliners this week. “I think he’s got the best lateral quickness we’ve seen in a Gopher running back since Jeff Jones.”

Brooks, a redshirt senior this fall with the Gophers, is a slashing, side-to-side runner that is also elusive in the open field. Despite injuries resulting in partial seasons, he has 1,882 career rushing yards and five touchdown runs of 37 yards or longer. Jones, the 2013 Mr. Football in Minnesota, was a four-star recruit coming out of Washburn High School but personal issues held back his development in college football.

Another 2020 recruit at a playmaking position is Rosemount’s Jonathan Mann, 6-foot-2, 190 pounds per 247. The wide receiver has been committed to Minnesota for about a year, despite offers from Big Ten and SEC programs. When Burns talks about the three-star recruit, he mentions Gophers senior wide receiver Tyler Johnson who was named Association Press All-Big Ten First Team last fall after catching 74 passes for 1,112 receiving yards (second in the Big Ten in both categories).

A second verbal commit from the state of Minnesota is Winona defensive end Aaron Witt, listed at 6-5, 230, according to 247. Burns describes him as a “very aggressive” player.

‘’Aaron Witt is someone that they (the Gophers coaches) really, really like at the defensive end position now,” Burns said. “He’s got to put on a lot of weight. He’s only 235 pounds right now, and you look at him, and you’re like he looks like he’s a buck 70 soaking wet.”

C.J. West from La Grange Park, Illinois is another defensive commit, a 6-2, 305 pound tackle. Iowa and Iowa State have pursued him but 247 reported in late February that West wants to play for the Gophers. “Someone that the staff thinks is the most powerful defensive tackle in the Midwest,” Burns said.

The fifth verbal commit for 2020 is Casey Collier, a 6-6, 300-pound offensive tackle per 247. He is from an under recruited part of Texas (small town Mont Belvieu) and Burns said that’s a factor in why other Power Five schools haven’t offered him a scholarship. “Obviously good size,” Burns said. “He’s got extremely long arms; someone that is athletic enough in their eyes (Gopher coaches) to play tackle.”

An estimated 250 fans attended Tuesday’s indoor Gopher football practice where loyalists could not only watch the team but have a photo taken with Paul Bunyan’s Axe. Minnesota reclaimed the traditional trophy with the Badgers with a win last fall for the first time in the series since 2003.

The victory over Wisconsin was part of a surge by the Gophers with surprise victories in three of their last four games. With most of his players returning in 2019, head coach P.J. Fleck knows the Gophers, who are drawing top 25 national mentions in early rankings, won’t be taken lightly by opponents this year. “We’re not going to shock anybody; surprise anybody at all,” Fleck said at a post-practice media session.

The 2019 season will be Fleck’s third as Minnesota’s head coach. Struggling college programs, including Minnesota’s in the past, are characterized by small senior classes and totals can even dip under 10. The Gopher roster lists 14 players in their final season of college eligibility, but Fleck sees things going in the direction he wants.

“We don’t have those senior classes of 25 or 30 guys…we’re not there yet,” he said. “Those guys (who will make a large senior group) are still sophomores (total 36).”

Sophomores include running back Mohamed Ibrahim who rushed for 1,160 yards last season, the second most for a Gopher freshman ever. He set a school single game rushing record with 224 yards in the impressive 34-10 bowl win over Georgia Tech.

Fleck said Ibrahim can get better. “I don’t worry about him because he’s the hardest worker we have. The way he works, the commitment level he has. He doesn’t take anything for granted, whatsoever. He knows he has to get better, loves getting better, loves the competition and that’s what you want to recruit and develop (in players).” 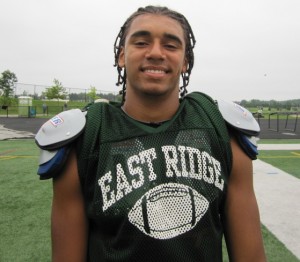 Green, the former East Ridge quarterback, could be among the players Fleck will hold out of the April 13 Spring Game at TCF Bank Stadium.

In addition to the Spring Game, the other remaining opportunity for the public to see the team is next Tuesday starting at 4:45 p.m. on campus.

Antoine Winfield Jr. returns as a redshirt sophomore this spring having played in only four games last season because of injury. He will go into the fall regarded as one of the Big Ten’s best secondary players and perhaps eventually become a finalist for the Jim Thorpe Award given to the nation’s premier defensive back. His father, former Minnesota Viking Antoine Winfield, won the Thorpe while at Ohio State.

Junior’s brother Austin will join the Gophers later in the year as a freshman walk-on defensive back. Asked what the first tip will be for his little bro, Antoine Jr. said, “Never be late for anything.”

Former Gophers athletics director Joel Maturi, now in his sixth year serving on the NCAA Division I Committee on Infractions, will host colleagues in town for the Minneapolis Final Four for an open house at his residence on Sunday, April 7.

The Twins, who open their regular season today, have a formidable schedule between now and early May. They play championship contending teams in the Astros (twice), Indians, Mets, Phillies and Yankees. If Minnesota can be at .500 by May 6 it will be impressive.

Last Sunday’s “60 Minutes” program on CBS predicted legalized sports gambling will be approved in over half of the states by year’s end. Minnesota is all but certain to be included, if not in 2020 then sometime beyond.

Nbadraftnet.net’s latest projections for the 2019 NBA Draft in June don’t include Gophers Amir Coffey or Jordan Murphy in either the first or second rounds. Apple Valley’s Tre Jones, a freshman at Duke, is projected to go in the second round at No. 36 to the Mavericks. The website predicts the Timberwolves will take Texas Tech shooting guard Jarrett Culver at No. 13 and Washington forward Robert Franks at 43.

The MLS United’s Darwin Quintero has three assists and is tied for the league lead in that category with two other players. The Loons, who will have their first game ever at Allianz Field in St. Paul on April 13, hosted season ticket holders for an open house last weekend. The club’s Black and Blue Team Store, and Brew Hall, are open to the public including on non-game days.