Welcome to a Monday notes column on the Gophers, Vikings, Twins and Wild:

Golden Gophers redshirt junior wide receiver Demetrius Douglas announced this afternoon on Twitter he is leaving the team. The tweet said little about future plans, but he expects to graduate from the University of Minnesota in December with a degree in Communications Studies, and he expressed admiration for the Gopher program.

Douglas, expected to play major minutes this fall for the Gophers, caught 14 passes for 157 yards last season and also returned kickoffs and punts. His absence would have been a bigger loss if All-American wide receiver Rashod Bateman hadn’t decided recently to rejoin the team.

Because of the uncertainty caused by the pandemic, players at major college programs have been opting out and back in. The Gophers play Michigan in less than weeks for their season opener and the Minnesota roster remains unsettled.

“There will be a time that I tell you who is in, who is out,” Fleck said today during a media press conference. “That’s why the updated roster, I haven’t given that yet. I am still waiting on a few more…of a decision they make. I don’t want to give you names and all of a sudden they opt in tomorrow, but I told you they opted out today, or opted out yesterday, and opted back in. I don’t want that pressure on those student-athletes. …. I want them to do it for all the right reasons, and the reasons that they have with their families.” 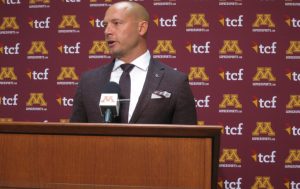 Fleck talking about junior linebacker Mariano Sori-Marin, who is expected to play a big role for a defense that will be featuring a number of new starters including him:

It wouldn’t be surprising if news comes this week that Vikings defensive end Danielle Hunter, who has been inactive through the first four games, will have surgery on the disc herniation in his neck. Apparently rest and presumably meds and physical therapy aren’t allowing Hunter, who missed much of preseason camp, to play again.

Former NFL quarterback great Peyton Manning had multiple surgeries on his neck for a herniated disc and missed an entire season before resuming his career.

Seattle is 4-0 for the first time since 2013. That Seahawks went on to win Super Bowl XLVIII.

With Midwest pandemic numbers remaining a high concern, don’t expect any change on the policy not allowing fans to attend the next Vikings home game, October 18 against the Falcons. The organization remains hopeful of hosting a limited number of fans later in the season.

Credentialed news media are covering Vikings games at U.S. Bank Stadium’s press box. Dave Mona, with over 40 years in the role, is back as the press box voice providing information to reporters.

That was former Gopher Jack Brewer seen in a commercial for president Donald Trump during Sunday’s Vikings-Houston Texans game.

North Dakota State stars and Minnesota natives Trey Lance (Marshall) and Dillon Radunz (Becker) are expected to be early round NFL Draft choices next year. Lance, an underclassman but eligible for the draft, is a top quarterback prospect and likely first rounder. Radunz, an offensive tackle, projects as an early rounds prospect.

Athlonsports.com points out the Bison, with six draftees since 2014, have the most players among FCS programs chosen in the NFL Draft. In a story Sunday, the website reports there are 11 ex-Bison players on NFL rosters and practice squads.

What grade do you give the 2020 Minnesota Twins? Mine? C.

That evaluation includes the 60-game regular season and the Wild Card series. The Twins were preseason favorites to win the AL Central Division and did so. Without that achievement, the C grade would be lower because the Twins were a complete flop in losing their best of three series to the Houston Astros.

F is the grade Minnesota deserves for losing consecutive games to the Astros, managing a total of seven hits and two runs. The Twins extended their postseason consecutive loss streak to 18 dating back to 2004. Asked about a then 16-game streak before the series started, manager Rocco Baldelli suggested his players might not be aware of the historic futility. Maybe all of them should have been informed of the embarrassment—and they might have played better.

What to do now? Sign to another contract 40-year-old DH Nelson Cruz, who drove in both runs in the Wild Card series and during the season was an AL MVP candidate. After seeing his club stumble in playoff losses last season and this, Cruz might decide he wants to go where he has more support.

The Bomba-hyped Twins need a couple of veteran position players who cannot only be leaders but guys who put the ball in play and get on base instead of focusing on launch angles. It will also be interesting to see what the organization’s evaluation is of the overall hitting philosophy, and support of Rudy Hernandez following his first season as hitting coach.

Third baseman Josh Donaldson and management have to figure out if there are ways to keep him healthier. Signed in the offseason to a free agent $92 million deal, he was a bust after being hurt much of the year and unavailable for the playoffs. On the to-do list also is find a talented starting pitcher talent to replace Jake Odorizzi if he doesn’t re-sign—and settle on a quality closer, maybe Tyler Duffey in the ninth innings. Taylor Rogers and Sergio Romo were too undependable.

In the messaging department, suggest Twins’ bosses deliver this offseason memo: Every job is open. No guarantees.

The Minnesota Wild today announced it has acquired a third-round selection in the 2021 NHL Entry Draft from the San Jose Sharks in exchange for forward Ryan Donato. Minnesota owns six picks in the draft, including the ninth overall selection. The draft will be held virtually on Tuesday and Wednesday, with the first round beginning at 6 p.m. tomorrow.

The club has re-signed forward Nico Sturm to a two-year, $1.45 million contract. The 25-year-old was a rookie last year and he had two assists in six regular season games. Also re-signed is defenseman Carson Soucy to a three-year, $8.25 million contract that goes through the 2022-23 season. He scored 14 points for the Wild last season.