Vikings to Pick O-Lineman, But Wait

Mock NFL Drafts have the Minnesota Vikings choosing an offensive lineman with their No. 14 first round selection Thursday night. “I would go offensive lineman, there is no doubt about that,” agreed former Viking Bob Lurtsema.

Lurtsema, who still follows the team with passion, was asked about taking the best player regardless of position. “I’d go best offensive lineman (available),” he answered.

That could be Virginia Tech’s Christian Darrisaw who has excelled at the offensive line position the Vikings need the most help at, left tackle. Quarterback Kirk Cousins, with limited mobility, needs a stud left tackle to protect his blind side and Darrisaw’s athleticism is impressive.

No guarantee, though, Darrisaw will be available when the Vikings make their first round pick. It’s a possibility he will, with as many as five quarterbacks expected to eat up draft slots early in the draft. Oregon’s Penei Sewell is the most coveted offensive lineman in the draft and almost certain not to be available to the Vikings unless Minnesota moves up the draft board with a trade. 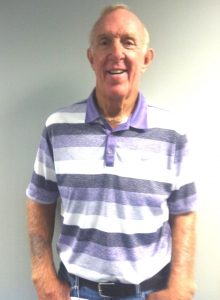 Northwestern’s Rashawn Slater and USC’s Alijah Vera-Tucker could both be available to Minnesota. Both have shorter arms than ideal, with Slater’s arm extension measured at 33 inches and Vera-Tucker’s 32⅛, per NFL.com. Lurtsema said his long arms were a key in his playing 12 years on the defensive line in the NFL. Extra extension is important for offensive and defensive linemen, with the man in control able to move a foe like the guy is on roller skates. “You’ve got total control,” Lurtsema said.

Darrisaw’s arm length is 34¼ inches, but neither he, Slater or Vera-Tucker may be Minnesota’s preferred selection in the first round. Vikings’ needs include an edge rusher to pair with Danielle Hunter, or even replace the talented defensive end if Minnesota can’t meet future contract expectations. Although the Vikings have given extra attention to adding defensive personnel in the offseason, they still might pass on an offensive lineman to take Michigan edge rusher Kwity Paye.

Paye has the kind of athleticism and explosive style that excites both fans and scouts. He has also been praised for his work ethic and leadership. Although his football playing experience is limited and fundamentals need to improve, he might be too much for defensive-minded Vikings coach Mike Zimmer to pass up.

Gophers Rashod Bateman and Benjamin St-Juste could go in the first and third rounds respectively. Wide receiver Bateman impresses with his route running, while St-Juste has the long arms not common for cornerbacks.

Sports Illustrated notes that Jay Berwanger from the University of Chicago was the first player selected in the inaugural NFL Draft 85 years ago but never played in the league because he wanted to try out for the Olympic Decathlon team and he “could make more money as a foam rubber salesman.”

Jeff Diamond, the former Vikings GM, offers his NFL expertise on TalkNorth.com podcasts. Diamond, who started with the Vikings as an intern, also was president of the Tennessee Titans.

An NHL authority, speaking anonymously, said Minnesota Wild rookie scoring sensation Kirill Kaprizov has “(Wayne) Gretzky traits behind the net.” Kaprizov excels there in setting up goals and points, just like the “The Great One,” the source said. He’s not suggesting Kaprizov is another Gretzky but he is impressed how the young Russian has transitioned to success on the ice in the NHL.

Kaprizov has fit in with the team’s culture, too. His affable manner makes him a comfortable teammate to be around. Another player with his talent could be a prima donna but Kaprizov, who turns 24 today, is the opposite.

The Minnesota Timberwolves, with a season record of 17-44, are 5-6 since enigmatic guard D’Angelo Russell returned to the team from injury April 5. With a new hair-do and improved play, the talented Russell is averaging 19.4 points, 4.7 assists and 2.3 rebounds since his return.

Russell scored 23 points in Minnesota’s win over the Utah Jazz in Salt Lake City Saturday night. The Wolves are 2-0 against the Jazz this season, even though Utah has the best record in the NBA at 44-16. Wagering money will be on a Jazz win tonight (Monday) when the teams meet in Minneapolis.

FanSided’s “way-too-early” Big Ten basketball power rankings for next season have coach Ben Johnson’s Gophers No. 12, ahead of Northwestern and Nebraska.

Admirers of legendary coach John Anderson (40 years into leading the Golden Gophers baseball program) are hoping he and athletic director Mark Coyle will soon announce details about a new multiyear contract. The all-time winningest baseball coach in Big Ten history and a high character leader, Anderson is in the last year of his contract.

The Twins, in their 60th season based in Minnesota, had an exasperating loss for the ages last Wednesday against the Athletics in Oakland. The A’s scored an improbable 13-12 walk-off win in the 10th inning without a base hit. A pair of two-out walks and a mishandled game-ending ground ball by Minnesota second baseman Travis Blankenhorn loaded the bases before a throwing error by third baseman Luis Arraez allowed the winning run to score. A Sports Headliners reader and Twins fan described the mess as a “top 10 loss” in franchise history.