Craig Leipold has owned the Minnesota Wild since 2008. Before that he owned another NHL franchise, the Nashville Predators.

“This is the best team I’ve had in 22 years of owning an NHL (club),” he told Sports Headliners. “It is the full package; very few weaknesses on this team. …It’s a special team and I think special things are going to happen.”

The Wild finished the regular season Friday night with a 53-22-7 record and second place in the Central Division. That’s the franchise’s best record ever. When Leipold owned the Predators they had best seasons of 51 and 49 wins.

The Wild open the playoffs at home Monday night against the St. Louis Blues. Even a casual Wild fan wonders whether this Minnesota team can make a deep playoff run and perhaps win the league’s ultimate prize, the Stanley Cup. That would be a first for the Wild franchise that started as an expansion franchise in the 2000-2001 season.

“It’s a fine line,” Leipold said. “It takes a lot of luck, let’s be honest. It takes a healthy team. It takes a hot goal tender. It takes very opportunistic goals at the right time. And we have the ability to do all of that.

“We don’t have many weaknesses—and our power play and penalty killing I guess would be the two. But five-on-five we’re in the top of the league. You play five-on-five for 80 to 90 percent of the game so I like our chances.

“The first round against the St. Louis Blues is going to be a really good series. If you’re a hockey fan, you’re going to want to watch these two teams play.”

A developing worry since Leipold spoke to Sports Headliners is Friday night’s injury to forward Marcus Foligno. He left the game against the Colorado Avalanche after being kneed in the first period. Part of a shutdown line, his potential absence in the playoffs would be a setback for Minnesota.

Leipold watched his team practice late last week and he saw energized players enjoying themselves, not a group worn down by the grind of the 82-game regular season. “You can tell, they’re just having a great time.”

Leipold hired general manager Bill Guerin in August of 2019. He has renovated the roster and installed former assistant coach Dean Evason as head coach. Guerin, who came from the Pittsburgh Penguins as assistant GM, has shown a discerning eye for both evaluating player talent and character. 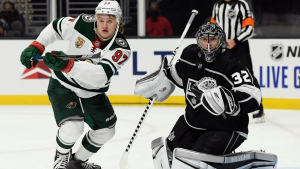 Guerin has earned the owner’s trust and confidence in making moves like adding defenseman Dmitri Kulikov last summer. The 31-year-old veteran’s experience and skills were a welcome addition to the roster, and presumably, too, is the Russian’s fit in the locker room where he joined countryman Kirill Kaprizov, last season’s NHL Rookie of the Year.

“Billy knows he’s got the green light to do any of those kinds of deals,” Leipold said. “He doesn’t need my approval for that. He’ll just do that deal. …I was very happy to get a player like Kulikov on our team.”

There is something else about Guerin that impresses Leipold a lot and it’s the GM’s will to win. “He wants to win a Stanley Cup where he is the general manager. Where this is his team. …It’s great to have a GM and a leader in that department that is driven that way.”

Kaprizov led the team in regular season goals, assists and points. He is in the first season of a five-year deal. Kevin Fiala was second in goals and points, and the Wild face a salary cap crunch trying to re-sign the restricted free agent in the off season. “I can tell you when we look at players we want to sign next year, Kevin Fiala is on top of the list,” Leipold said.

The owner can’t be sure he and Guerin will be able to retain Fiala. “If we were unencumbered by a cap system, we would spend whatever it takes to get him. But we live in a salary cap world and Kevin has played himself into a very good contract for next year, and we’ll see where it goes.”

The Wild and other NHL teams went through the worst of financial times at the height of the pandemic when fans weren’t allowed to attend games. Now the Wild are playing before sellout crowds and that’s significant in the NHL where gate receipts are vital to the bottom line.

Leipold said all the home playoff games will be sellouts and his expectation is the same for the 2022-2023 season. “The fans are spectacular. They see in this team a special team as well.”

Anyone remember a Gopher player performing a song at halftime of a U spring football game? That’s what happened yesterday when sixth-year tight end Sam Pickerign sang on the field while a TV audience watched on the Big Ten Network.

Head coach P.J. Fleck also used his creativity showcasing wide receiver Michael Brown-Stephens who was targeted for numerous passes and also lined up in the backfield while his high school brother, Anthony Brown, watched from the sidelines. Brown is a four-star receiving prospect from Springfield, Ohio who has shown considerable interest in Minnesota.

Brown-Stephens was one of three spring game MVP’s along with defensive back Miles Fleming and kicker Matthew Trickett.

Byron Buxton apparently likes the month of April. Although the Twins center fielder missed some games with injuries, including yesterday, he played enough to lead the team in home runs and RBI (11). His six homers rank near the top among MLB leaders.

Hall of Fame-bound Tony Oliva has signed a partnership agreement with Dan Stoltz and locally based SPIRE Credit Union. Oliva will appear in TV commercials and other promotions for SPIRE.

The baseball Gophers will host Nebraska next weekend for a three-game series at Siebert Field. On Saturday Minnesota will honor past teams including the 1960 Big Ten and NCAA championship team. The Gophers also won national titles in 1956 and 1964. No Big Ten baseball team has won the NCAA championship since 1966.